And this is what the Stoics are like in logical matters, so they can maintain that the wise man is always a dialectician. For everything is seen through consideration of it in arguments: both what belongs to the topic of physics and again what belongs to ethics.

—From Diogenes Laertius, our major surviving source for Stoic logic.

“Logic” for the ancients included anything that was remotely connected to rational thought. It was the huge, messy toolbox that allowed us to make progress in the the other two branches of philosophy—“physics” and “ethics.”

The Stoics famously compared logic to the wall that surrounds a field (ethics was the fruit, and physics was the land), or to the shell of an egg (with physics and ethics inside). 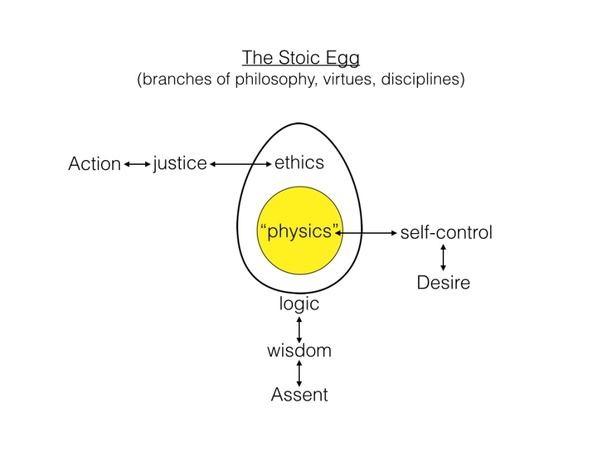 In its broad sense, then, ancient “logic” included all of what we now call rhetoric, grammar, semantics, logic proper, and epistemology. So Stoic logic involved quite a bit, some of which was extremely influential on later thinkers:

But if we take “logic” in its narrow, modern sense, then Stoic logic—the system of formal logical reasoning developed by the prolific philosopher Chrysippus in the 3rd century B.C.E.—is uncannily similar to the kind of logic you find at the beginning of introductory logic textbooks today. They were way ahead of their time.

Today, almost nobody knows much about Aristotle’s syllogisms, but every computer programmer, digital circuit engineer, mathematician, and philosopher is fluent in something very close to Stoic logic.

This is because the Chrysippus developed the first full-fledged system of propositional logic, which is closely related to modern Boolean logic. If you’ve ever taken an Artificial Intelligence class, a Discrete Mathematics class, or some other general introduction to logic, then you’ve already been exposed to most of Stoic logic’s key components.

In modern terms, what the Stoics provided was a system of natural deduction for propositional logic that is based on five (axiomatic) rules of inference.

There are two parts to a system like this: propositions, and inference rules that act upon them.

Unlike Aristotle’s more famous (but less powerful) system, which was based on syllogisms, Stoic logic starts with simple propositions—statements that are either true or false. A favorite examples from the ancient texts:

From here, we can build up complex propositions by using logical connectives. The ancient connectives look very similar to what logic students study today, with some light variations:

Notice that the Stoic or is what we now call an exclusive or. Today’s convention of carefully distinguishing between two types of or didn’t develop until rather recently, so disjunctions were a rather confusing topic for ancient students!

Another topic of debate in the ancient world was how the if statement ought to be interpreted. Today everyone accepts that we should treat an if proposition as “true” even if the antecedent is false. This is called “vacuous truth,” and while it’s a little confusing when you first learn it, it makes a lot of sense with our modern love of treating propositions as Boolean functions and charting their full truth tables:

In the ancient world this was not obvious at all. They had no concept of functions (Boolean or otherwise), and even truth tables would have confused people (“Can’t only one row really be correct in any given situation? How can you tell me that there are four for every if statement?”). So you can be sure that vacuous truth was a tricky thing to discuss.

Once you have propositions, you need a way to reason about them. The Stoics called rules of reasoning “indemonstrables,” because they acted as the axioms of the system that everything else was “demonstrated” from.

The Stoics knew that are lots of different “indemonstrables” that we could choose as the basis of our system, but they preferred to use these five (which I will represent in modern symbolic notation):

For the Stoics, these rules are the basic building blocks of formal arguments and demonstrations. The difference between the two is that an argument proves something that is rather obvious, while a demonstration starts with obvious premises and leads us someplace unexpected.

Here is one simple example of an argument taken from the ancient texts. It uses the third indemonstrable (negated conjunction):

Therefore, Plato is not alive.

They also identified what we would call logical fallacies: such as arguments that were “improper by omission,” “logically disconnected,” or “redundant.”

And we know that, to help train people in how to recognize these fallacies and to think through the philosophical foundations of logic, they and their debate partners in other schools dreamed up a lot of subtle little logical puzzles with fancy names like The Master or The Liar.

But we don’t know much more than that about Stoic logic. This is because almost everything we know about it, and certainly everything in this post, comes from one fragment of an ancient textbook preserved in Diogenes Laertius’s 3rd-century C.E. anthology of philosophy.

The prolific works of Chrysippus, while arguably even more famous and important than Aristotle for the ancients, did not survive the decline of ancient civilization, and it was Aristotle’s logic that dominated logical work in the Latin West.

Logicians didn’t pick up where the Stoics left off and start developing the science of logic to new heights until George Boole and Gottlob Frege picked up propositional logic again in the late 1800’s and launched the modern revolution of mathematical logic, digital circuits, programming languages, Artificial Intelligence, and more.

At the heart of all this, however, are still Chrysippus’s good ol’ propositions. With all that is new, Stoic logic is still doing a lot of the real work in these modern technologies.

2 thoughts on “What is Stoic Logic?”