Becoming something of a majority leader, Cato pressed his conservative optimates to pass a resolution condemning Pompey’s attempt to change election law for his own interest…

The Stoic leading the statehouse thwarted the conqueror at every turn, using his now-perfected filibuster to kill the populist legislation. With little room to maneuver, Pompey would try a new approach.

This passage from West Virginia state delegate Pat McGeehan’s recent book illustrates one of many ways that today’s students of Stoic tradition have found it to be a rich resource for ongoing political inspiration. 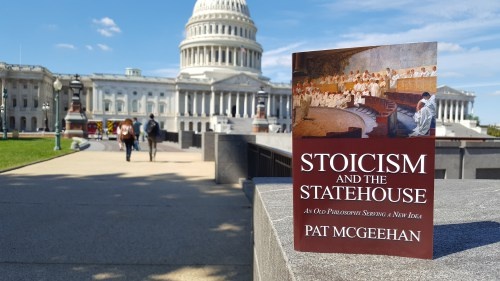 While the idea of a “political stoic” personality may sound like an oxymoron to our modern ears, the Stoics were famous in the ancient world for being politically engaged.

Today we normally think of a “stoic” as a rather amoral person—obsessed with eliminating uncomfortable emotions, and indifferent to the events around them. But to the ancients, Stoicism was an extremely active and pro-social life stance that focused very much on finding ways to (materially!) serve and benefit the people around us. So much so, in fact, that a Stoic who wanted to withdraw from politics had a lot of explaining to do! Justice—and an especially broad and demanding understanding of Justice at that—is one of the four virtues that lie at the center of the Stoic life, and to be apolitical was tantamount to being un-Stoic.

Modern Stoics have recently dusted off this long-neglected and once-famous aspect of Stoic moral philosophy and begun to bring it back into fashion—McGeehan’s book being a case in point.

Now, McGeehan happens to be a passionate libertarian. I myself have a leftward bent, and I’ve argued that Stoic principles can and should inspire us to care about racial justice, and even to engage in protest movements (despite the apparent tension between Stoicism and some forms of protest rhetoric).

Other modern Stoics have recently argued for a virtuous approach to handling the environment, for reconciling the apparent tension between Stoic virtue ethics and consumer capitalism, and more (check out the Stoics for Justice reading list for more modern Stoic perspectives).

Point being, practicing Stoics can and do hold a variety of political opinions, and we can be found at most points of the left-right continuum (or any other metric scheme you may devise). But not all points. As we say, Stoicism is a “big tent,” but not just anything goes.

Stoicism is largely a philosophy of life, in that its focus is on personal character and action, and not so much on ideological systems or statecraft. And it’s true that Stoic practice often looks like little more than a lone individual reflecting pensively over a private notebook: But that doesn’t make it politically irrelevant. If anything, Stoicism’s focus on individual deliberation, action, and citizenship makes it more relevant to our real political lives.

All well and good, you say, but what actual political ideas does Stoicism support? Well, ancient Stoicism’s heyday lasted some 600 years, and “the Stoics,” like their modern counterparts, were a diverse group of people that made a wide variety of political comments—some quite conservative, to use the term broadly (like Hierocles), some much more radical (like Zeno, with his ideal republic).

But from my reading of the Stoics, three principles do stand out to me as especially characteristic and central to Stoic political philosophy in any era. These are agreed upon by virtually all practicing Stoic thinkers, from Chrysippus in the 3rd century B.C.E. to Lawrence Becker in 2017:

3 thoughts on “What political ideas are supported by Stoic philosophy?”