I have no particular reason for bringing this up today, but it can never hurt to be too clear about this:

Let’s just add Cicero’s glorification of honor killing—complete with stigmatizing rape victims and suggesting that they are better off dead, and that people who kill them are moral heroes of the highest order—to the list of places where I am not just willing, but EAGER to disagree and absolutely repudiate ancient thinking on morality an virtue ethics: 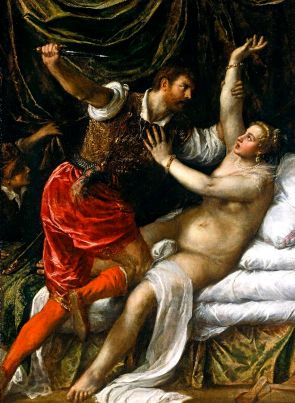 I feel no need to respond to this idea with any kind of argument.  To be honest, I don’t care if honor killings were rare, or if the paterfamilias rarely exercised his authority over life and death, or whatever else you want to educate me about to make it seem less horrible:  I am very pleased to live in a culture were we unanimously see this absurdity for what it is!

All I have to say to Cicero is: nope.  Nope nope nope.

Liberating, isn’t it?  Not that Cicero spoke for all of the Stoics (the Stoa had quite a variety of views on sexuality)—but there are times when being free to disagree with our canon is a beautiful thing.

If you want to learn more about Lucretia and Verginia, and if you have a strong stomach for uncensored storytelling, I highly recommend Steven Saylor’s fictional re-telling of the history of Rome: Roma: A Novel of Ancient Rome (2007).